Travelling to and in Denmark

If you are arriving by air, you will most likely land at Copenhagen airport Kastrup (CPH). This airport is flying in excess of 20-million passengers per year to both distant (European and Intercontinental) and domestic destinations. Copenhagen Airport has a rail terminal for transport to the city and buses run frequently. Taxis are plentiful but more expensive; fares include VAT and tips, and you can normally pay by credit card. 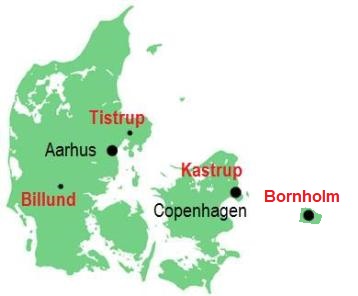 Other smaller airports are mainly used by short-haul airliners:

By train to Denmark 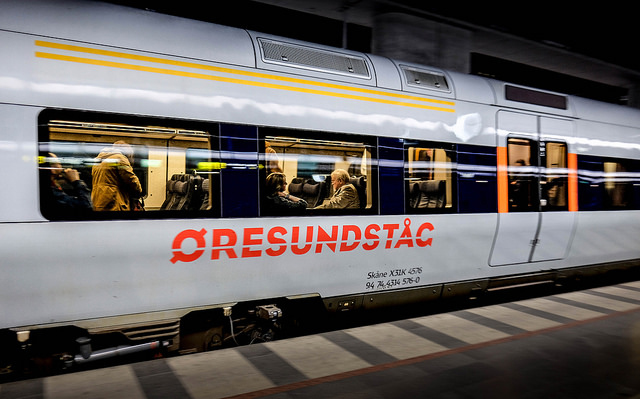 There are direct regular international trains from Germany and Sweden:

Being almost an island Denmark has an extensive network of international ferry services:

To Denmark by bus

Denmark has bus connections provided by Eurolines to many European countries. Abildkskou-Busser and Grahundbus also operate regular bus services to Berlin in Germany and Malmö in Sweden. Not all lines run on a daily basis.

To Denmark by car 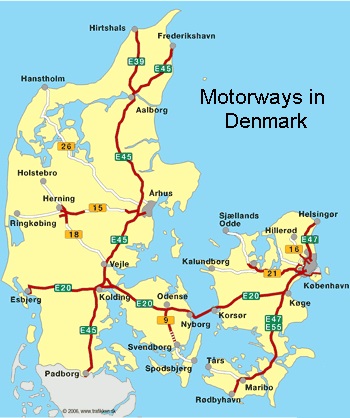 Denmark can be reached from Germany and Sweden via a superb network of motorways and roads. Cars can be stopped at the border for random checks, but this happens very rarely. An International Driving Permit is not required for up to 180 days with tourist or visitor status, as long as you are in the possession of a driving license from your country of origin.
European "E" roads are international motorways linking Denmark to the rest of Europe. E-road signs are always green with white numbers. In Denmark there are five European motorways (called 'Motorvej'): the E20, E39, E45, E47 and E55. Each motorway exit has both a number and a name (most often the name of the nearest town). A hexagonal sign with a white background and red numbers indicates the number of the exit. A blue road sign indicate the name(s) of the exit.

Getting around in Denmark 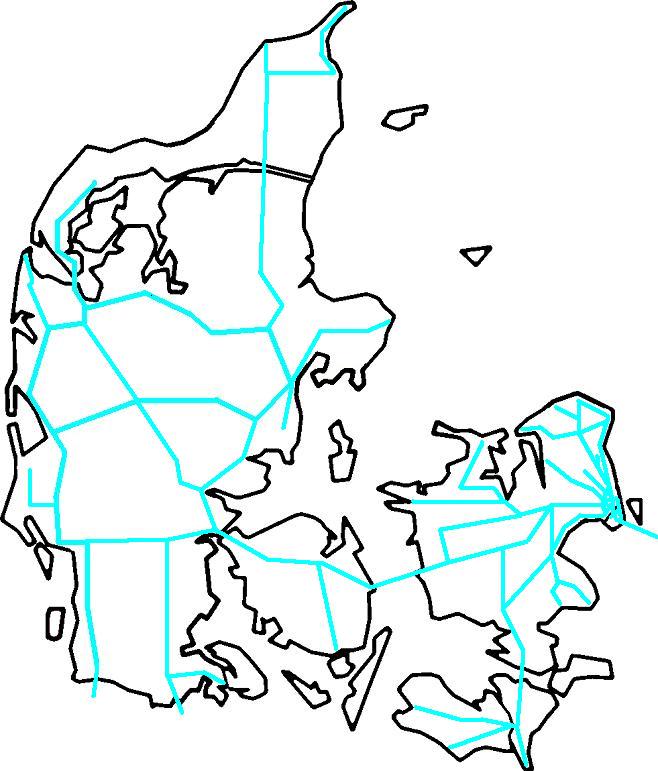 Denmark has an extensive, efficient and affordable public transport system, partly run by the state and partly by private companies. The Danish State Railways Service, the DSB [‘Danske Statsbaner’] provides services on 80% of the routes. The other 20%, predominantly in the mid-west are operated by Arriva and are called "Privatbane". There are two main types of trains: The InterCity Express [Lyntogs] trains and local trains [Regionaltog'] which stop at every station.
Both express and local trains run at least one-hourly service on the principle routes. With the exception of a few rural lines, the minimum weekday frequency is one train every 30 minutes.Tickets are available at all stations, both DSB and private, and there is one national tariff system. Ticket reservation is strongly advised. Combining the rail and bus services is also very simple, as your train ticket extends to your continued journey on a bus. The Express trains have 2 categories: Business (former 1st-class) and Standard" (former 2nd-class). It is perfectly feasible to take your bikes on the majority of Danish trains. You will need to purchase a separate ticket for your cycle from the ticket office. The Scandinavian Rail Pass allows unlimited travel within Denmark, Finland, Norway and Sweden.

Over the centuries local ferries have been part of the landscape in Denmark, linking the islands to the main-land. Today they are still an important form of public transportation, both economically and from a recreational point of view. There are large sea-going ferries and smaller boats for the fresh water crossings. One of the most popular is the Bornholm ferry service. The Danes are Europe's s most profilic bridge builders and have realized huge projects. Although many local ferry services are rapidly being replaced by bridges for over the last 50 years there are still many national ferry lines.

The Danish coach and bus networks are extraordinarily extensive, and enable you to reach even the most remote corners of the country. To get from one end of the country to the other it is often quicker to hop on a coach than take the train, because the connection is usually more direct. Some cross-country bus routes work out to about 20% cheaper than trains. Daily express buses include connections between Copenhagen and Aarhus (3 hours) and between Copenhagen and Aalborg (5 hours). There’s also a twice a day express-bus service between the Jutland port cities of Frederikshavn and Esbjerg (five hours).
Urban bus services are also well organized. The Copenhagen Metro has become very popular with both local commuters and tourists since opening in 2002. A new metro-line connects Kastrup international airport with the city centre.
Transporting bikes on Danish buses is possible on some regional bus lines.

Travelling by car in Denmark

Denmark is a pleasant country for touring by car. Danish secondary roads are among the best in the world an all roads are good and very well signposted. Falck and DAH provides 7x24 hour emergency breakdown assistance.
Access to and from Danish motorways is straightforward - roads leading out of town centres are named after the main city that they lead to (e.g. the road heading out of Odense to Faaborg is called Faaborgvej). Today all main roads in Denmark have their own numbers, and all motorway exits are numbered as well. The colour of the road number indicates the road class and the route reference signs with their dotted frames refer to the roads further ahead. Denmark’s extensive ferry network carries motor vehicles at quite reasonable rates. Fares for cars average three times the passenger rate. It is always advised for drivers to make ferry reservations in advance (even if it is only a couple of hours ahead of time). Tolls are applicable for two main bridges in Denmark: the 18km (11mi) long toll Great Belt bridge and tunnel, linking Copenhagen with the island of Funen and the Oresund bridge-tunnel combination, which links Copenhagen with Malmö in Sweden.

There are taxis available in all cities and most towns in Denmark, and drivers usually speak English. A vacant taxi carries the sign 'Fri' (free) in the window and a green light on top of the car. You can hail a taxi off the street or pick one up at the many taxi stands.
Taxi fares are relatively high. Tipping is not needed because a service charge is included in the fare.