For navigation during your self-guided bike tour in Germany you can use maps with optional cue sheets or a GPS (Global Position System) device, or both. When you book a tour through one of the bike tour companies they will provide you with daily routes. Cycling self-supported means that you must organise this yourself. 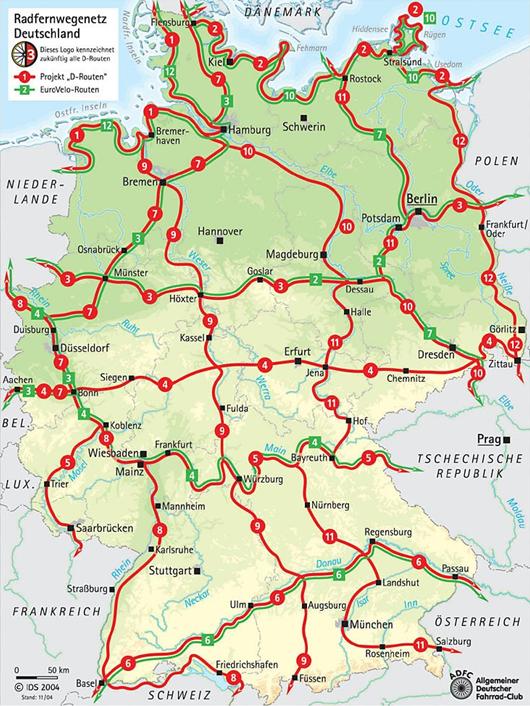 Germany has more than two hundred long-distance cycle routes [Radfernwege] covering over 60,000km/36,000mi as well as countless other well-signposted cycle routes. Many long-distance cycle routes in Germany even dip in and out of neighbouring countries. The routes are designed to keep cyclists away from heavy traffic on highways and arterial roads. Most of the riding is on roads and bike paths where there is light or no automobile traffic at all. Riverside routes are especially popular. A good reason for this is the predominance of flat sections along the river banks that are suitable for cyclists of all abilities. Many regions have invested in cycle tourism and cyclists pay great attention to the standards of the routes on offer.

Some long-distance cycling routes often have their own symbols which are also used for the direction signs. Communities are increasingly establishing their own local bike routes. You can frequently obtain free route information from these communities or at many of the accommodation addresses. The "D-Netz” nationwide cycling network (which has it own signage) consists of short and direct connections for everyday traffic as well as on regional and attractive tourist routes.

There is an excellent range of cycling maps and route-guidebooks of Germany available. The "ADFC-Radtourkarten" from the German Cyclists' Federation ADFC [Allgemeiner Deutscher Fahrrad-Club] are recommended. These maps have been drawn up by cyclists and feature 27 cycling maps, covering Germany on a scale of 1:150,000. Other mapseries include the "ADFC-Regionalkarten" and the "ADAC-Radtourkarten" from the German Automotive Club. Both on a scale 1:75,000 but these series do not cover all of Germany. Maps of local (signed) bike routes can be often obtained free from the Tourist Offices [Fremdenverkehrsämter]. Guidebooks/maps for most long-distance routes [Radfernwege] are available in the German language and only a few are available English, including the Danube and Mosel routes. The German language guidebooks can still be useful because of the detailed maps and pictures where language is less important. There is even a 290 page book describing all the long-distance routes. Cycling maps and routebooks might be hard to come by in smaller bookstores and even at the tourist-offices in Germany. Ordering and shipping maps is advised.

Currently there are many GPS (Global Position System) navigation products available on the market, including hand-held GPS devices, right through to online routing programs at which you can choose existing cycling routes or create routes yourself and download these to your GPS device, for free or paid.

The ‘pros & cons’ in using GPS during your cycling tour.