For navigation during your self-guided bike tour in The Netherlands you can use maps with optional cue sheets or a GPS (Global Position System) device, or both. When you book a tour through one of the bike tour companies they will provide you with daily routes. Cycling self-supported means that you must organise this yourself.

Cycling routes in The Netherlands 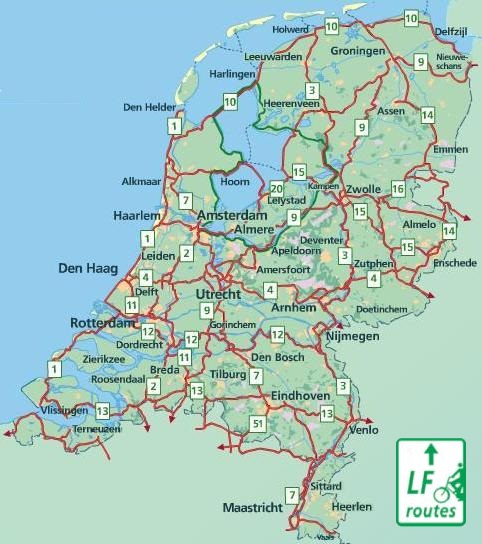 In Holland there are thousands of signposted scenic routes for bikes, of which you can also buy maps. There are circular daytrips, multiple day circles, and multiple day long routes (LF routes, signposted in both directions). Some of the LF routes are over 300 km/180 mi long in total but you can start at any point in the middle, and connect to other routes if you have to.

You don't need to read even a word in Dutch to create your own cycleroute with the ‘Knooppunten’ system. ‘Knooppunten’ [nodes or marked interchange points] are numbers that you can find along the road, and on the map. Just follow the signs from one ‘knooppunt’ to another. You can make the route as long or short as you like, by following the numbers that you have choosen.

You need good maps to find your way around, and to avoid roads with heavy traffic when cycling in the Netherlands. The recommended scale for cycling maps is between 1:50,000 and 1:100,000. For an overview of your route you can use a 1:200,000 or 1:400.000 Michelin map. In Holland you need a map which includes cycle paths and cycle lanes. Not all maps include these paths and lanes, or they don't show the difference between hard and unhardened road surfaces. Many maps use a green line along roads to indicate that it's a scenic route. These roads also generally have light to moderate levels of traffic. There are also maps and atlases that give day roundtrips, as well as long-distance (LF) routes and also the ‘knooppunten’ networks. The cheapest and easiest way of getting maps, is to buy them on arrival in Holland. They are easy to find in the tourist information offices ('VVV'), at the ANWB (Dutch Cycling and Automobile Association) shops and also in large book shops in most towns and cities. If you don't want to miss out on the fun of using the maps to plan your trip weeks before you start your tour, it's also possible to buy Dutch maps online or even in your own country.

Currently there are many GPS (Global Position System) navigation products available on the market, including hand-held GPS devices, right through to online routing programs at which you can choose existing cycling routes or create routes yourself and download these to your GPS device, for free or paid.

The ‘pros & cons’ in using GPS during your cycling tour.